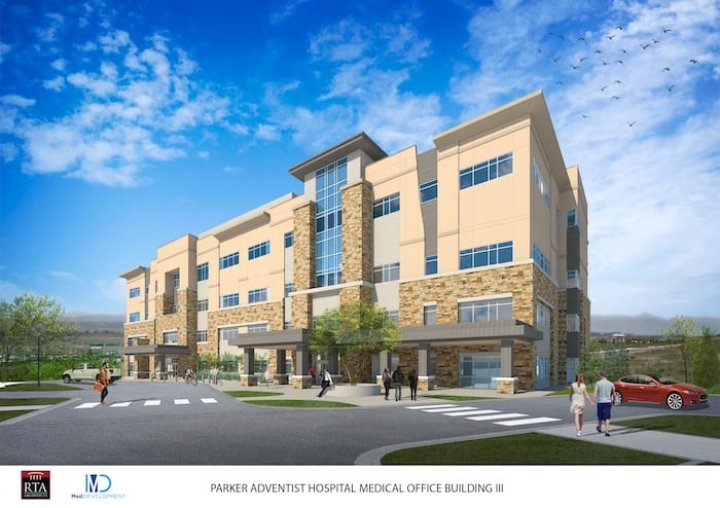 “We’re excited to be working with Centura Health and Parker Adventist to bring a great facility to their Parker campus,” said Ryan Bonner, president of Vertix Builders. “The new Parker MOB III medical office building will provide the people who live and work in and around Parker with a superior facility that will meet their health care needs for years to come.”

Parker MOB III will be a four-story, 86,000-square-foot building. Tenant spaces will include medical oncology services, internal medicine, obstetrics and gynecology, and an ear, nose and throat practice. Construction is scheduled for completion in early 2021.

Asked about unique design elements, “The main entry allows for a large covered canopy, which also extends to the near corner of the building allowing for connection to future buildings or expansion,” said Kevin Gould, AIA, principal of RTA Architects. “In addition, it leads to a protected exterior public courtyard. The main entry features a four-story tower element reflective of the campus motif.

“The entry sequence to the building is unique as there is one primary entrance for the entire building on the main level as well as a secondary entrance for a future large tenant,” Gould continued. A single drop-off serves both. The building is located at the highest point of the Parker Adventist Campus and positioned such that it allows unique and wonderful views on all four sides of the building.

The new building is being built on behalf of Premier Bone and Joint, an orthopedic group serving patients throughout the state of Wyoming as well as athletes from the University of Wyoming for over 40 years.

Vertix is working again with architect TreanorHL as well as the owner’s rep, Somerset CPA.

Upon completion, the $11 million, state-of-the-art surgery center will be a modern facility providing a full range of surgical care, from basic procedures to total joint replacements. It will include three operating rooms, a physical therapy gym, and be built on the current site while the other building remains in operation.

“It’s very exciting to play a part in caring for Wyoming’s residents and athletes,” Bonner said. “We’re proud to be on schedule to deliver a surgery center and physical therapy building this highly efficient and modern.”